Zhineng Qigong it is an effective qigong method for healing, improving the level of self-cultivation, developing human potential, etc.. Zhineng Qigong was created in the early 1980s by Dr. He Ming Pang.  Over almost thirty years of development, millions of people have benefited from Zhineng Qigong. Today it has spread all over the world benefitting more and more people. 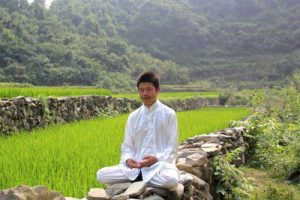 Zhineng Qigong combines a meditative mind state using visualization with physical movement and merges the essences of various styles of qigong including Confucian, Daoist, Buddhist, medical qigong, martial arts and folk qigong with contemporary science, medicine and philosophy. Dr. Pang developed this branch of qigong after years of intensive study of the different types of qigong combined with his knowledge of Western medicine to provide the quickest route to good health and enhanced energy.

Zhineng Qigong can not only help people improve their intellectual and physical abilities so that they can overcome illness, but also can develop paranormal abilities (similar to what we might call ‘ESP or extra sensory perception’). The power of Zhineng Qigong derives from Dr Pang’s theory of the inter-relatedness of everything in the universe and from the ability to tap into the universal energy or life force that surrounds us all, our planet and our universe – this universal energy is called hunyuan qi in Chinese and the idea of the all pervasive is known as Hunyuan Qi Entirety Theory.

Honored in the 1997 Official Yearbook as a “Chinese Exercise Method”, Zhineng Qigong has been approved by the Chinese Government and has been popular nationwide for many years. It is now becoming better known worldwide.

Zhineng Qigong is based on the Hunyuan Entirety Theory by Dr. Pang.

The three layers of matter

Dr. Pang described hunyuan qi as having three layers. The first layer is matter, that which is physically visible. The second layer is all invisible existence in the universe excepting information. It includes different types of energy, such as heat, light, electricity and magnetism, but it goes far beyond the Western scientific concept of energy. The third layer is that of information. It can be described as the ‘being’ and characteristics of every thing, i.e. that which distinguishes any one thing from all others.

These three layers manifest in human life as xing, qi and shen, i.e. the physical body, qi and consciousness. The qi of the first layer is our physical body. The qi of the second layer is our invisible qi inside and around the body, also known as our life force. he third layer is the qi of yiyuanti, on which our consciousness and mind activity are based. It sets humans apart from all other forms of existence.

The theory of the three layers of qi is important but is too complex to discuss in more detail here, although aspects of it are mentioned by Dr Pang in this book. Zhineng Qigong methods are made up of three stages and six levels, which are explained in Chapter One of this book. Many elements of the theories underlying them are contained in descriptions of how to practice well and explanations about why particular movements, postures and mind activities make up each method.

In the 1990s a Science Research Department was established at the Zhineng Qigong Huaxia Centre to research the laws of the universe and of human life addressed by Dr. Pang. Many scientists, a range of experts, and qigong practitioners cooperated to carry out this research. They looked at how the human mind can have an effect on different levels of hunyuan qi and bring about changes to plants, animals and the human body, as well as to inanimate objects. The most important research involved participants sending information that directed universe qi so as to create diferent levels of energy such as heat, electricity, magnetism, light, etc.

Hunyuan Entirety Theory is based on paranormal abilities, but it can only be written about in everyday language. As the level of its practitioners improves, Zhineng Qigong research will go deeper and deeper and will bring a revolution for modern science and the life sciences.

The goal of Zhineng Qigong

The goal of Zhineng Qigong is to build a new model of thinking and living for human beings that creates health, freedom, peace and happiness. The laws that this research will uncover, such as how the mind works with the body, and qi with the environment, will enable people to achieve a new sort of freedom. By understanding and working with these inner laws of life and consciousness, human life will naturally evolve in accord with them.

Zhineng Qigong is an open system that can be used in many ways. For example it can be used to strengthen the body and its functions, to do healing and also more generally in the field of health care, to develop mental faculties and abilities, to develop paranormal abilities. It can be used to improve animal and crop productivity. It also can raise achievement in sports, in the arts, in the different sciences – indeed, everything connected to human life.

Zhineng Qigong practitioners should not just practice the methods. They should use the qi field and consciousness field to merge with others, and contribute their life towards building a harmonious world and the evolution of humanity. This is the higher Dao level practice of Zhineng Qigong.