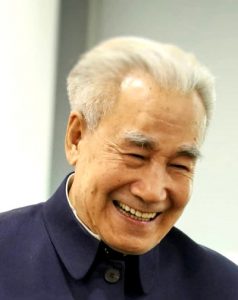 Dr. Pang Ming (庞明) is also known as Pang He Ming. He was born in 1940 in Ding Xing Town, Hebei Province, China.

He was part of a big extended family that included practitioners of Daoist and folk qigong. There was early recognition that he was not an ordinary child. When he was only three years old a qigong Master recognised the child’s special qualities and used his powers to confer on him some paranormal abilities. This enabled Pang to understand and learn very quickly and deeply, which was important for his studies and later work. Beginning in childhood, Dr. Pang learnt from traditional qigong and martial arts Masters and rapidly absorbed the essentials of their teachings. For instance, when he learned taiji he ‘opened his lower back’ in three months, whereas most students took at least eight years to achieve this. He studied under nineteen Masters, some of whom sought him out to pass on their knowledge.

Dr. Pang Ming has great depth of knowledge and works with rigour, precision and pragmatism. He is the founder of qigong science. In his youth Dr. Pang learnt and was nourished by qigong, traditional Chinese medicine (TCM) and the martial arts. Later he studied Western medicine in Beijing while also learning traditional Chinese medicine. After graduation he worked in Beijing in a clinic that combined Western medicine and TCM.

At the end of the 1950s Dr. Pang began researching Buddhism: reading Buddhist classics, following high-level Buddhist masters and practising Buddhist qigong. In the 1960s he mainly focussed on the martial arts, while in the 1970s he practised Daoist qigong. He studied with nineteen qigong and martial arts high-level masters. His TCM and Western medical knowledge established a good foundation for his research on the qigong classics, and in turn his qigong achievements created good conditions for his medical diagnostic and treatment techniques. He was thus able to cure many serious illnesses in the clinic where he worked.

By the late 1970s he was one of the best-known TCM doctors in Beijing and was treating senior government officials. In 1978 he was an important participant in the first session organised by the Ministry of Health to bring together TCM and modern medicine, which had a big influence in the medical field in China. He wrote several medical books during the 1970s.

In 1973 Dr. Pang had begun working alongside a qigong Master, teaching qigong and giving lectures. By the mid 1970s he had come to the conclusion that the medical approach was too limited and that the goal must be not just to heal illness, but also to change people so illness did not recur. During the late 1970s he burned the medical books he had written and gave up Medicine to research and spread qigong.

In February 1979 Dr. Pang attended a national TCM and Western medicine conference, organised by the Chinese Ministry of Health where he held the position of Senior Advisor to the Director of TCM in the Ministry. In July of the same year he was the main organiser of the first Chinese Qigong Conference. He also initiated and helped establish the Beijing Qigong Science Association, the first mass Chinese qigong organisation. Through the 1970s he focussed on improving his qigong science level, while at the same time he joined several qigong organisations and promoted their activities.

In 1980 he brought together an important group of qigong Masters to discuss qigong in China. At this time Dr. Pang created a modern qigong, based on Daoist and Buddhist practices and thinking, medical knowledge and modern science, folk qigong and martial arts teachings. In 1980 he created and began to teach He Xiang Zhuang (Flying Crane Form).

Then in 1981 he started to teach Xing Shen Zhuang (Body Mind Form) as the second level of practice, with He Xiang Zhuang as the first (later replaced by Peng Qi Guan Ding Fa, Lit Qi Up Pour Qi Down). He named his new qigong style “Zhineng Qigong”.

Dr. Pang reformed traditional Chinese qigong and created Zhineng Qigong as a new qigong style, introducing its theory and methods to the public. In the spring of 1981 he taught the first national training class on sending external qi for healing, organised by the Beijing Qigong Association. At this time he also cooperated with scientists to carry out many scientific experiments to prove external qi exists as a substance. This opened a new era for qigong.

At the end of 1984 Dr. Pang began using a qi field for treatment, then in 1986 introduced qi field healing methods more widely. Creating a qi field took external qi techniques to a new level. At the same time he began lecturing on hunyuanqi theory, consciousness theory, daode theory and the theories underlying qi field creation and external qi treatment. Soon afterwards he gave scientific explanations for hallucinations, and also about the phenomenon that occurs at a certain level of qigong practice, when yishi produces both true and false results that mix together in conflict. This created a sound foundation for Zhineng Qigong science to develop along the right lines and made a huge contribution to qigong science generally.

He taught throughout northern China, but in a revolutionary new way: he invented the use of the qi field for teaching. Using this, he broke with the traditional way of a Master teaching a few disciples and gave lectures to large numbers of people at a time. Many other teachers copied him at a time when numerous modern qigong styles were developed.

In 1988 Dr. Pang set up the Shijiazhuang Zhineng Qigong Centre.

In the early 1990s Dr. Pang gave lectures and detailed in Hunyuan Entirety Theory, his theory on the three aspects of matter: physical matter, energy and information. Realising that qigong scientific research was needed for Zhineng Qigong to develop to a scientific level, he encouraged Zhineng Qigong practitioners throughout China to carry out external qi experiments. To build connections between Zhineng Qigong and modern scientific knowledge, Dr. Pang set up a series of workshops for scientific experts and doctors. Experts in many fields came together, generally for a two-week period with 50–100 people. As a result some scientists began to research Zhineng Qigong from a modern scientific perspective.

As more and more people flooded in the Shijiazhuang Zhineng Qigong Centre, another centre was set up in Qinhuangdao in 1991, followed in 1992 by the Hebei Huaxia Zhineng Qigong Research Department and in 1995 by the huge Hebei Fengrun Huaxia Zhineng Qigong Healing Centre. A symposium was held at Huaxia in each of the six years 1992 to 1997. There were 4,224 study papers presented, covering agriculture, medicine, industry, forestry, fishing, and education, etc. During this time Dr. Pang established a scientific research department at Huaxia and held classes for scientists and experts from all over China. In 1996 Huaxia began to carry out experiments on changing hunyuanqi into light, electricity, magnetism, heat, and so on.

Dr. Pang lectured about qigong science in around thirty provinces in China. He was also invited to give lectures and teach qigong in Hong Kong, Macau, Taiwan, Singapore, Malaysia and Indonesia. Based on hunyuan entirety theory, teacher Pang created systematic methods that were simple, easy to learn, safe, highly effective and in accord with the laws of human life activity.

Zhineng Qigong as the most effective medical qigong style

Although being the leader and founder of Huaxia Centre, Dr. Pang never promoted himself. He always treated all teachers and students as equals, and saw himself as a qigong science worker. He repeatedly emphasised the importance of avoiding individual glorification. He became a model for new kinds of relationships in qigong organisations, he lived very simply, remained an upright person, and worked rigorously and diligently.

It is not by chance that Zhineng Qigong is so effective. Zhineng Qigong is the first qigong practice based on a fully developed theory, the work of an extraordinary man, Dr. Pang Ming. He drew on an immense range and depth of knowledge to provide a new understanding of the universe and of human beings, one based both on ancient insights and wisdom, and also on modern scientific knowledge.

In 2001, the Zhineng Qigong centers of Dr. Pang and all other large qigong centers in China have to be closed due to new regulations by the Chinese government.

Although Dr. Pang has retired, he still continues his work on Hunyuan qi science and writes books.

In 2003 Dr. Pang created the name ‘Shong’ theory to describe his three levels of matter theory. Since then, Zhineng Qigong scientific research has continued in 9 different parts of China. In June 2016 an international symposium is being held in Shanghai on the three aspects of matter theory. In 2012 he published Summary of Zen Buddhist Theories and Methods and in 2015 Summary of Inner Cultivation in Confucianism.

A selection of Zhineng Qigong books written by Dr. Pang:

Some of these books have been translated into English by teacher Wei that can be purchased on this website.